The power of habit 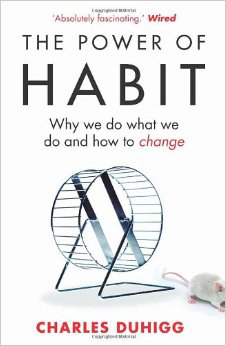 Our brains loves habits, unfortunately it doesn’t distinguish, whether it is a good habit or a bad one. If you are curious about your own or company habits, this is a book worth reading for many reasons. Mainly if you are interested in making a positive change for yourself, other people or an organisation, if you want to know about the science of habits and willpower or if you simply enjoy well written stories about change. Both historic onces like Martin Luther King and The London Underground Fire as well as more personal recollections and advertising examples.

When we talk about helping others changing their habits, we’ll often say: “If only he/she understood the importance of changing, then it would be much easier”. BUT really, most of us DO understand, why it would be good to change a bad habit. It is not our rationel thoughts that needs to be strengthened, it is our emotional battle, that needs focus and support. Find out the emotional need and craving behind the habit, and look and feel why the change is attractive to you or the other person.

The easiest way to change a habit

Usually a habit is being triggered by something → you’ll then carry out a routine → in order to recieve your reward.

According to Charles Duhiggs book, if you can keep the trigger and the reward the same, and only change the routine in the habit circle, then it becomes far easier to change the habit.

An example from the book: An alcoholic most often drinks in order to feel relief. Now instead of drinking, AA puts a new routine into the habit circle, where the alcoholic takes contact to their sponsor and talks to them, when they feel the urge to drink. This then provides the relief and replaces the drinking.

Do you have a habit/routine that you would like to change? Then have a think about these questions.

What is the purpose of changing the habit? Why is it attractive to you – what do you want to achieve and avoid? Especially why is it emotionally attractive?

1. Why have you got the habit? which need or craving does it satisfy?
2. What is the trigger signal?
3. Which routine does that start?
4. What do you achieve from doing this routine? What’s the reward?
5. Which new routine could I put in there instead?

And then make a decision – take action.

TIP: Think about where you can get support. Who will believe in you and that the change is possible? Ex. who can you call, when you are being challenged?

Check out my FB page to get noticed of future posts and get more inspiration,